Georgina Rodríguez: Everything You Want to Know About Her

The Spanish model Georgina Rodríguez has become the most passionate love affair of Juventus star Cristiano Ronaldo since he broke up with long-term partner Irina Shayk.

Cristiano Ronaldo lives most of his life in the public eye, but he has preferred being reserved about his personal relationships since beginning to footballing stardom.

The Juventus forward dated Russian model Irina Shayk for almost five years until January 2015, when their break-up was defined as “like a death” in the family by his sister Elma.

Georgina Rodriguez has been with superstar footballer Cristiano Ronaldo for nearly four years.

The couple now has a daughter together they named her Alana, they are also bringing up Ronaldo‘s other three children.

Here is all you want to know about the Spanish-Argentine model Georgina Rodríguez.

Who is Georgina Rodriguez?

Georgina Rodriguez was brought up in Jaca, a city in northeastern Spain and part of the province of Huesca, near the Pyrenees.

Her mother belonged to the Span and her father was Argentinean.

Georgina learned to dance before swapping professions to modeling after studying English in London.

She had to work as a waitress in her hometown before moving in with a family in Bristol, England, as an au pair.

The Sun reported that her father is a condemned cocaine trafficker named Jorge Rodriguez, 69, who spent ten years in prison.

The 25-year-old was first recognized on a series of dates with a famous football player, a superstar Ronaldo by the end of 2016.

According to AS, Rodriguez first met the Portugal star at a Gucci store in Madrid, where she was serving as a shop assistant.

“His height, his body, his beauty caught my attention. I was trembling in front of him, but a spark ignited,” Georgina Rodriguez stated.

“I am very shy and perhaps this stirred me more in front of a person who, with one glance, had touched me deeply. Then after, the way Cristiano treats me cares for me, and loves me did the rest.”

The relationship grew firmly gradually from there with time, and they began to be caught by paparazzi together in public in late 2016. Most memorably, Ronaldo was discovered in a hair wig and sunglasses in a try to disguise himself during a tour to Disneyland Paris later in the year 2016.

Rodriguez has since visited Real Madrid matches and, of course, has been a member of the family for the FIFA awards, visiting the ceremonies with Ronaldo’s mother, sisters, and son.

There was no official disclosure of the relationship in photos posted on Ronaldo and Rodriguez’s Instagram accounts, but it became quite obvious that they were in a relationship.

Since When Georgina Rodriguez and Cristiano Ronaldo Has Been dating?

The couple seemed to start dating after a few months when Ronaldo was found cuddling up to fitness model Cassandre Davis in August 2016.

And, while it is tough to comprehend specifically how long Ronaldo and Georgina have been with each other, their first public date was in mid-November 2016.

On February 23, 2017, Ronaldo played with a friend advising him to “be careful” when he uploaded a photo beside Georgina.

What Future Do They Keep?

This relationship seems absolutely the most passionate he has had since breaking up with Irina in 2015, a fact that is extremely emphasized by the fact that Georgina recently gave birth to a baby girl, that girl was her first with Ronaldo and the Juventus star’s fourth kid.

Georgina also seems to get along well with his son, Cristiano Jr, who Ronaldo holds full custody of and cares for with his mother, Dolores. The identification of Cristiano Jr’s real mother has been kept as a secret since he was born in the United States in 2010.

Indeed, Georgina is very much attached to all the children of Ronaldo, and she regularly takes pictures with all of them in apparently tender moments.

They both have made it obvious they are in love, and Georgina even showed it out on Instagram. She was even present with Ronaldo there when Ronaldo’s yacht was inspected by tax agents in the Balearic Islands and followed Ronaldo from Madrid to Spain after he signed a contract with Juventus.

More children together maybe something they both want, but possibly marriage is not too far down the line.

How many children does Cristiano Ronaldo have?

The star has now four children after the birth of Alana Martina.

Ronaldo, 32, welcomed twins named Eva and Mateo into the world in June 2017 after a surrogate mother supposedly gave birth to them in America.

He is also a daddy to seven-year-old son Cristiano Ronaldo Jr.

In May 2020, an update to her Instagram story revealed a blurred photo of her chewing gum with the words “Baby Girl” typed above beside a heart covered in a bow emoji. 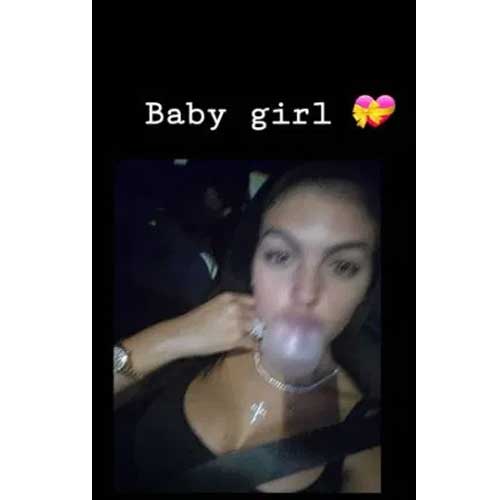 Rodriguez did not announce she was expecting but the evidence unquestionably hinted there was a chance she was pregnant.

Georgina has been recognized at many Real Madrid games, usually sitting alongside and talking to Cristiano Jr in the executive boxes, as well as visiting many Juventus matches.

She celebrated Ronaldo’s first Serie A victory with Juventus in 2019.

“Congratulations, my love, for being once more a CHAMPION. We love you,” she posted on her Instagram.

The model has also been there to support her husband at his award ceremonies, such as the FIFA Best Awards.

During the 2018 World Cup Georgina was found at Portugal’s games, encouraging Ronaldo from the stands.

In their final group match against Iran she posted a picture of herself wearing a Ronaldo No.7 shirt with the caption: “Come on Cristiano. We love you”.

We hope from this article you will get to know about Georgina Rodriguez well. If you have any questions do not forget to contact us.