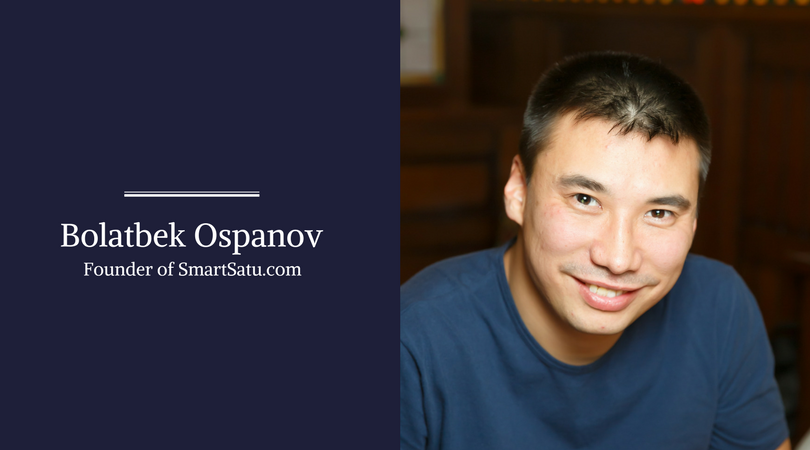 Exclusive interview with Bolatbek Ospanov, Founder of SmartSatu.com. While talking with Bolatbek, We got to know very exciting and inspiring story about his successful business “SmartSatu”. It is a B2B platform connecting store units (shops, restaurants, hotels) with distributors and producers. Today, the system operates in Kazakhstan, Russia, Belarus, Kyrgyzstan, Uzbekistan, Tajikistan and Saudi Arabia.

I have been working since the first grade washing cars and selling newspapers. When I was 11, I photographed on Polaroid camera in cafes and restaurants. In the senior year I was working in IT company where I was engaged in computers assembly and service.

After graduation, my friends and I opened the first Internet cafe in the shopping center, and three years later it turned into a network of 11 Internet cafes in different cities of Kazakhstan under the “OnlineClub” brand name.

In 2011, the Internet became available – a 3G broadband Internet appeared, mobile Internet development through smart phones and other devices began.

These circumstances led to the closure of our “OnlineClub” Internet cafes network and I had to think about what to do next.

After that, I assisted my friends in the opening of a cafes network specialized in pies baking based on a franchise models. I also helped with the opening of the distribution company. Eventually, I gained a certain experience from all of it, which I channeled into the development of the SmartSatu.

When working in a distribution company, I saw that large hypermarkets had already used process automation and electronic document management EDI, while numerous of small shops, restaurants and hotels needed process automation much more. It should be noted that producers and distributors bear a significant expenditures working with small shops, restaurants and hotels by means of a large army of sales agents, who are daily engaged in accepting orders and promoting the goods from suppliers. Then the model of distribution of free tablets to store units with cellular operators providing free Internet traffic for the mobile application of SmartSatu appeared.

How much potential market share can you achieve in next 3 years?

Now we have a trading team in Kazakhstan, Russia and other countries, that builds the business model. After all business processes are digitized and the system is simplified as much as possible, we transfer the model to the online mode, then create a SAAS solution that is not depend on the human factor.

We provide a single sign-on via www.smartsatu.com (web access) and a mobile application for Android and iOS platforms, available for public access in PlayMarket and AppStore.

This year we plan to present the SmartSatu platform in the head offices of major worldwide producers, such as P&G, MARS, Unilever, Mondelize, etc. The purpose of the presentations is to show the producers the SmartSatu solutions and the unique advantages of the system. If these worldwide producers start using the SmartSatu system in all countries and get at least 1% of optimization in each country, then globally there will be millions and billions dollars of cost-cutting, while the producers won’t have to spend an additional cent. It is important to note that the SmartSatu system also provides a deep objective analysis of large databases on sales, which is an urgent need of the world’s producing companies. Frankly, I wasn’t the greatest student, I do not read much, I do not have enough diligence. But I constantly read news.

What is the best and worst purchases you’ve ever made?

Steve Jobs who made the world more convenient, mine in particular 🙂

I am proud of the team that I managed to create in the SmartSatu project.

The biggest challenge for me is our project, the SmartSatu, I have no goal to become the richest person in the world. There are a lot of millionaires and to become another millionaire among a thousand of others is not cool, while to make a huge global product that will benefit everyone – this is what is cool for me.

People can connect with me via Email

Our aim is to provide Exposure, Outreach and Connecting them with the right audience and promote their businesses worldwide. We are formed by Global Entrepreneur’s who has wide experience in technology and business development. Our aim is to create value for startups and making them recognized to the mass audience.

If you are Entrepreneur, Marketer or Technologist and want us to cover your success story. Please contact us via email ([email protected]) and our media team will get in touch with you.

Interview with Madelynn Loo – CEO and Founder of KIX Heels

Alice Veglio, Italian Entrepreneur Shared The Secrets On How She Built A Community Of Over 15,000 Empowered Women