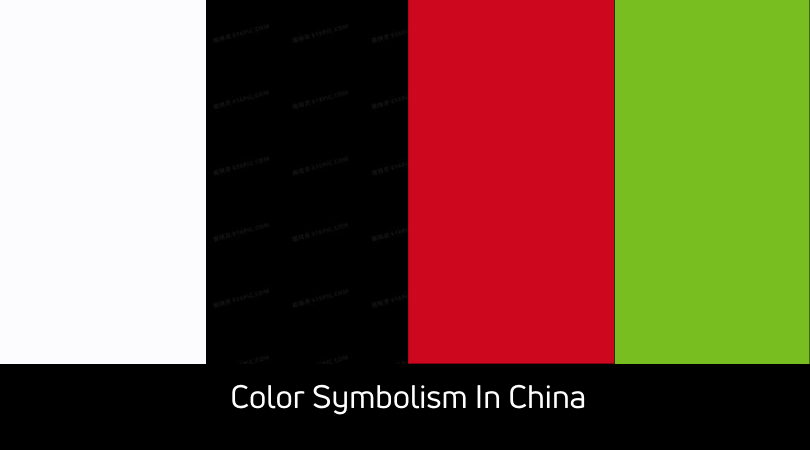 Culture plays a vital role when connecting symbolic or obscure meanings with other colors. China is a country that is rich in heritage and displays colors symbolically within every celebration, festival, and ceremony.

Chinese culture sets great value on symbolism since the old times, the Chinese people have had obscure meanings and deep significance in associating with everything. Some little-known cultural superstitions about color have similarities in many parts of modern Chinese society. For instance,

Green hats suggest that the wearer’s wife is cheating on him, and

Black edges around photographs indicate that the person in the picture is dead, and

White gift wrapping makes the receiver think of his own death.

Black, when used in copywriting and text, has an extensive collection of symbolic connotations that include evil, unhealthy, corrupted, unlawful, and/or selfish. As a color, it has a notion of formality and thoughtful in the thoughts of the Chinese people.

And when presenting gifts of any sort, never cover them in black.

Hint: Do not over-use black. Never place black borders around photographs of people. It suggests that they are dead and are being memorialized! Avoid displaying someone’s portrait in black and white tone. This makes your viewers believe in pictures on graves.

White is used in cremations, which is quite unusual from western culture. A “white envelope” is an envelope of cash to display sympathy to the family of the departed person, much opposite to the “red envelope” presented to newlywed couples and children.

White is one the color that you must avoid for anything celebratory or festive. White should never be used in association with wedding ceremonies, particularly in the less westernized regions of the country.

And when presenting gifts of any kind, never cover them in white.

Hint: Be careful with the use of white according to the setting of the marketing material or activity. Look expert guidance before using white as a brand or marketing feature element.

For non-Chinese, red is the most prominent color to use in marketing work. According to the perception of Chinese culture, red symbolizes China, and everything Chinese. Essentially, this is true, but there are significant subtitles that must be analyzed in the precise positioning of your product or service.

In early China, the color red obtained its meaning from fire. Unlike many other countries where the fire has long been considered as a symbol of uncertainty or damage, fire is generally supposed to be a good thing in China. The Chinese people have a saying, 红红火火 (hóng hóng huǒ huǒ, or literally “red, red, fire, fire”) which means the life of someone grows, prospers, cracks and rockets like a red flame. By the same faith, 火了(huǒ le, “caught fire”) suggests something has earned substantial fame, and the adjective 火爆 (huǒ bào, “fire and explosion”) indicates to the places such as busy markets jam-packed with people, or a book or movie which is full of energy and excitement.

With the starting of the People’s Republic of China in 1949, red was used as the representation of communism, revolution, and “liberation”. Understand this choice of red was determined by the USSR rather than the old characteristics of the color, it is also important to note that Mao’s communist party was philosophically and oftentimes strongly against superstition. So do not mix the red of China’s contemporary political system with “the red of the common people”. The ancient roots of red do not include revolution.

Tip: It is good to use some red to form “Chinese elements” in your collateral, but do not overuse it.

Producing marketing collateral which is predominantly red will almost surely confuse the thoughts of your audiences. And do not handwrite in red ink, it says that you are finishing your relationship with your correspondent.

To overuse red out of meaning is unquestionably poor conceptual communication, so if you have a lot of red in your marketing materials, look for expert help before publication in China.

Green is a color that can confuse new participants to the China marketplace. While the concept of “green” in the western world has some connections in China, there are complex but significant variations that most new market participants fail to understand.

In China’s mainland, green means “clean” or “free of contaminants”. Put into practice, this is not the same meaning of clean that westerners might consider. Mostly when westerners talk about “green technology” or “green energy”, they indicate “sustainable” or “eco-friendly” kind of cleanness to Mother Nature.

However in China, “Green” vegetables are free of pesticides but may add to environmental degradation. “Green” milk is milk without toxic melamine. “Green” publications are without specific or forbidden content. So you notice, “green” a broadly fit adjective with much more extensive and quite distinct meanings to “green” products or services in western society.

In overall meaning, green is a safe choice of color in just about anything, other than hats. Symbolically, “getting a green hat” suggests a man has an untrustworthy wife (in ancient China, husbands of prostitutes used green headscarves). When arranging gifts for guests, partners, or clients, green should be avoided at all means if the gifts are meant to be consumed anywhere on or near people’s heads.

Tip: Go ahead and use green for just about any marketing purpose, but do not think that your “green” product or service will be perfectly understood by your Chinese viewers without particular market education built into your campaign. And do not give green hats away at your business except you want to be mocked.

Yellow can be risky to use in your marketing materials. If your copywriting refers to a product or service and that is associated with yellow, great care should be taken.

When the term for “yellow”, is used in association with any kind of publication or media, it suggests the thing it represents is pornographic.

Another important cultural marker for the color yellow is that in ancient times, pure, bright yellow was used only by emperors of various dynasties. To say someone has 黄袍加身 (huáng páo jiā shēn, “to wear the yellow robe”) means he has ascended to the throne, most likely by usurping. These ancient emperors kept the color yellow for their own sole use, and anyone found using yellow in any way during their dynasty would be put to death.

Tip: Be very cautious with using the color yellow in your marketing and communications ventures. Avoid large swathes of yellow, and avoid yellow in your key corporate identity brandmarks and product brand marks. The judicious use of yellow is permissible by a deft marketing agency.

Similar to many European and British cultures, purple is an image of aristocracy but it was never the royal color.

Unlike European and British cultures, purple has a profound sacred meaning in China. An ancient Taoist symbol of divine existence is canonized as “a purple cloud coming from the east”.  This saying is always used in association with anything mortal ascending to eternity.

Tip: Be imaginative and consider using purple to your benefit. Recall a movement for Dewar’s Scotch Whisky executed in China a few years ago with purple velvet wrapping every surface of the set. This was a very influential method of relating the Dewar’s brand with positive concepts of nobility and eternity.

Gold is a color that has been used in China as a symbol of nobility and wealth for a long time. It is closely associated with the ancient majesties ’ “bright, pure yellow”.

Tip: It is good to use metallic gold and golden colors in your marketing stuff. There are rare if any, cultural mock pas to be cautious for.

However, it is advised to avoid over-use of the color gold. There was a time from the late 1980s to the middle 1990s when almost every Chinese mainlander became crazy about gold ornaments and golden colored paints. This “gold rush” has resulted in over-use of the color to be the domain of the nouveau riche, and can easily make your information cheap-looking.  Fair use of gold is one of the tips for profitable marketing and advertising in China.

Chinese people rarely use a rainbow spectrum in stuff. The Gay Pride rainbow is unknown in China. Use of spectra in Chinese marketing stuff is probable to make your Chinese audience believe that you are presenting the national flag of a minor country, or that you have used cheap, end-of-run colored stuff in your production.

In ancient times, a rainbow across the sun would predict that the ruler would soon die or be challenged.

Tip: If you need to use a rainbow or a color spectrum necessarily, go right ahead, but any hope for cultural resonance will possibly be befallen on your audience.

China, as a modern country, has a lot of aspects, and a full spectrum of colors. Stereotyping it with red is a safe but ordinary strategy. Unrestricted your imaginativeness and experiment with various colors in a different cultural context. All will be using fine as long as your design or stuff is supported by reliable market study and cultural analysis.

We hope this article will be helpful to you for choosing the right color for your marketing campaign. If you have any queries, do write to us we will be pleased to answer your question.

The Heart Wrenching Story of Shanann Watts Murder by Her Husband

Exclusive interview with Mariia Tsegelnyk: Spiritual healer & founder of The Light of Healing