Top 10 Most Influential American Entrepreneurs of All Times 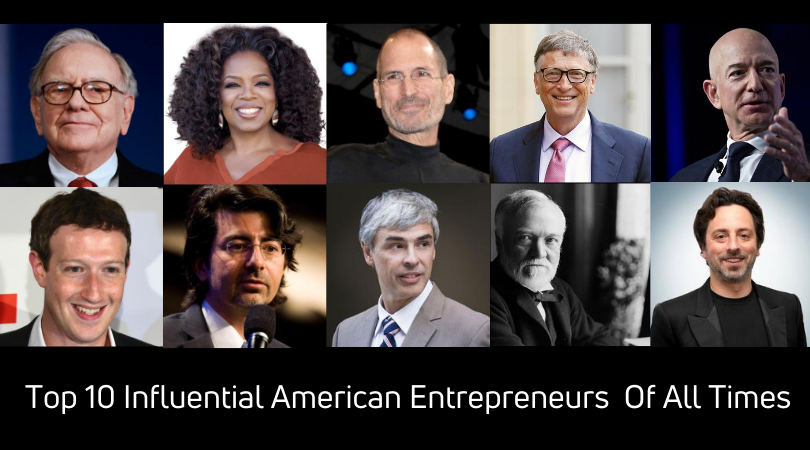 Persistence is the key that makes entrepreneurs successful. Success does not come through having a huge amount of money but it comes through focus and determination.

An influential entrepreneur wants to be positive behind a positive legacy.

Entrepreneurs built products and services that would help the world in a better way.

Americans are one of the fortunate countries which are able to produce influential and successful entrepreneurs from time to time.

Below is the list of top 10 most influential American entrepreneurs:

Warren Edward Buffett is an American investor, business magnate, and philanthropist, who is the chairman and CEO of Berkshire Hathaway. He is regarded as one of the most influential businessmen in the world and has a net worth of 71.8 billion US dollars according to as July 2020 record, making him stand on the fourth-wealthiest person in the world.

Buffett is a significant philanthropist, having pledged to give away 99 percent of his wealth to the noble causes.

Oprah Winfrey is another bright example of an American influential person. While she did not disclose her previously tragic life until the year of 1986, Winfrey was a sufferer of sexual assault at the age of 9 and came to be pregnant at the age of 14.

These early obstacles and sufferings gave her the standpoint and confidence that encouraged her to appear on her first TV show in 1983. From there, Winfrey gradually developed her brand and her regime, establishing Harpo Studios which is a multimedia company built-in 1988. The company, with the help of ad generate revenue and other revenue streams, has slowly risen to over 12,500 workers.

Winfrey is also a co-founder of Oxygen Media which is another media company that captivates millions of annual television viewers. Winfrey, a TV persona becomes an entrepreneur from her hard word, she possesses a net worth of $2.6 billion as of 2020 record.

Steve Jobs was an American business tycoon, industrial designer, investor, and media owner. He was the chairman, chief executive officer (CEO), and co-founder of Apple Inc., the chairman and majority shareholder of Pixar, a partner of The Walt Disney Company’s board of directors following its acquisition of Pixar, and the founder, chairman, and CEO of NeXT.

Jobs is widely known as a pioneer of the personal computer revolution of the 1970s and 1980s, along with Apple co-founder Steve Wozniak.

Jobs regained Apple’s successes until his unexpected death in 2011, advising the advancement of the company’s famous line of creations, from the iMac and iPod to the iPhone.

Bill Gates is one of the widely well-known American entrepreneurs of technology. He is listed in second place among the richest person in the world with a net worth of over $104.7 billion as of 2020 record. Bill Gates started tinkering with personal computers at an early age with his friends including Paul Allen. Exhibiting a lot of ability and commitment, Gates registered at Harvard, where he encountered Steve Ballmer before dropping out to begin Microsoft.

Bill Gates, with the assistance of Allen, Ballmer, and others, created Microsoft which became one of the world’s enormous and most significant tech companies. As of 2020, Gates is still a member of the board of Microsoft, which is regarded as over a trillion dollars as per its market capitalization, but he has refocused on his personal venture, the Bill and Melinda Gates Foundation.

As Bill Gates improved the way we work and play, Jeff Bezos has modified the way of our purchasing. The savvy retailer felt a gap in the market and developed the Amazon website in 1994, now it is the world’s biggest online retailer and cloud infrastructure service provider. Number one richest man in the world, Bezos is also pioneering commercial space tourism via his Blue Origins aerospace company.

Mark Zuckerberg inaugurated the most famous social media site of the world in February 2004 from his dorm room at Harvard University and has come to the list of one of the wealthiest people in the world off the back of its success. The entrepreneur is now intending to give away a huge amount of his wealth to the noble causes.

Pierre Morad Omidyar is an American billionaire entrepreneur, a competent software engineer, and a philanthropist. He is the founder of eBay where he worked as chairman from 1998 to 2015. Which began as a side project and altered into the western world’s most prominent online auction and shopping site, which has generated unlimited copyists. He became a billionaire at the age of 31 with the success of eBay in 1998.

Larry Page is the co-founder of Google which is unmatchable the world’s number one search engine. Google was begun with Larry Page and his business partner Sergey Brin while they were doctorate students at Stanford University. With a starting investment of just $100,000, the two partners shortly developed Google into a multinational empire. In 2015, Google was restructured to form the parent company Alphabet Inc., with Page working as CEO. Page has a net worth of over $50 billion as of the record of July 2020.

Andrew Carnegie was an American entrepreneur who even migrated from Scotland. He was born into the less privileged family, Carnegie and his family migrated to Pennsylvania, where they started living a decent lifestyle. Carnegie later established the Carnegie Steel Company, which gradually became one of the enormous companies in the history of the United States.

In addition to the accomplishment of his company, Carnegie became a very prosperous angel investor. Utilizing the money which was earned through his steel company, he further capitalized in several car companies, messenger services, and land that incorporated oil reserves. On his death in 1919, Carnegie had an approximate net worth of $350 million, which, in 2020 dollars, would be worth almost $5.5 billion.

Sergey Mikhaylovich Brin is an American computer scientist and Internet entrepreneur. Jointly with Larry Page, he co-founded Google. Brin was the president of Google’s parent company Alphabet Inc, until stepping down from the position on December 3, 2019.  Brin and Larry Page are still at Alphabet as co-founders, controlling shareholders, board members, and employees. As of July the year 2020, Brin is the 7th-richest person in the world, with an approximate net worth of US$67.6 billion

These are the topmost influential American Entrepreneurs over the years leading to the prosperous path in America.

Everything You Want to Know About the Life of Carol Bartz

What Must An Entrepreneur Assume Starting A Business?

Everything You Want To Know About Ken Dixon

Top 9 Most Famous Italian Entrepreneurs Of All Times