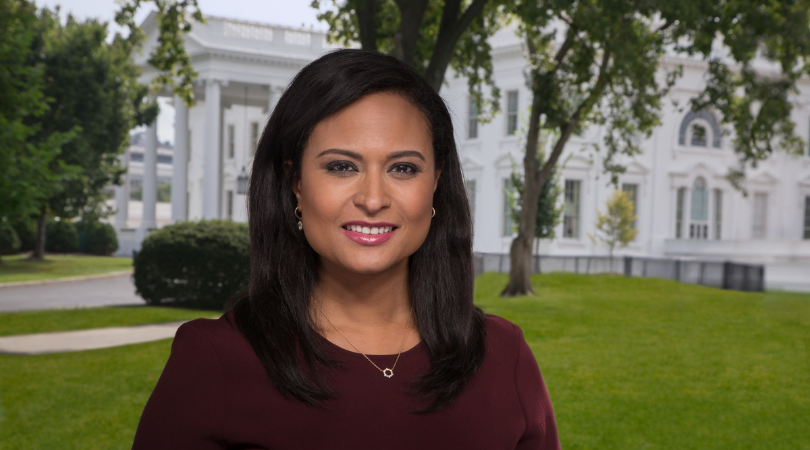 Kristen Welker is a new mom, embracing a daughter after the NBC News chief White House correspondent had shared her surrogacy story with the world.

Kristen Welker is enjoying the joy of motherhood. After two weeks, she and her husband, John Hughes, named their first surrogate daughter Margot.

“We are doing so well. The past two weeks have just been filled with pure joy!” Kristen told Weekend TODAY. Kristen and John informed back in April that they were expecting a baby with the help of a surrogate, and Margot Lane Welker Hughes was born on June 12 at 2:12 a.m

The longtime journalist and chief White House correspondent for NBC News shared the experience about the first time she met Margot, and it’s likely a moment she will not forget. “The moment I looked at her, we were just so deeply in love and she looked back at me and it was just the most incredible moment of my life, frankly,” Kristen recalled.

“It was … incredible. I helped catch Margot and she arrived into the world. I was so nervous but so excited at the same time and John helped to cut the umbilical cord.“

John added, “In an instant, our world completely changed in the most wonderful way. It was really amazing.”

The new parents gradually learn as they go, and Kristen even announced that Margot has developed a cute habit. “We’ve had some long nights and embarking on our shift schedule and every moment I just feel so filled up with joy and gratitude,” Kristen continued. “And you can hear, she’s sleeping. She kind of sings to herself when she sleeps.“

“We’ve sort of figured out a shift schedule that kind of works, you know, one person sleeps, one person swaddles,” John said. “A little bit of ‘fake it till you make it’ but so far so good.“

In a celebration of Father’s Day post earlier in June, Kristen wrote that it had been the “greatest joy” of her life to see John with Margot. “You are already the most amazing and loving dad.“

Welker was there at the hospital to grab her newborn daughter, Margot Lane Welker Hughes, and cut the cord when she was born.

Margot, named in honour of Welker’s grandmother, Margaret, weighed in at 8 pounds, 6 ounces. “We stayed in rooms next to each other and visited throughout so that little Margot and we could thank her for bringing Margot into the world,” Welker told NBC of her and husband John Hughes’s surrogate.

In April, Welker opened up about her surrogacy experience, saying in a “Today” show interview that she and Hughes had “struggled with infertility for years.“

After saying she felt like a “failure,” Welker explained how the couple turned to surrogacy, calling it one of the most “extraordinary experiences” in her life. Welker said she wanted to share the details of the surrogacy journey to “help other families.”

Welker had called the surrogate “amazing,” saying that she knew the woman was pregnant when she was moderating the final 2020 presidential debate last October.

“I can’t wait to tell my daughter that,” Welker said in April. “I credit her with the fact that I remained calm that night.“

Following her daughter’s birth on Monday, Welker said, “Margot is truly the love of our lives. Seeing her precious face and looking into her eyes had made every minute of our journey worth it.”

Welker and Hughes’s surrogate was said to be doing “very well” after the birth and was discharged from the hospital on Sunday.

Who is Kristen Welker?

Kristen Welker is a renowned NBC reporter, but she began her media profession in 1990, working with ABC affiliates WLNE-TV in Providence, Rhode Island. Later, she collaborated with KRCR-TV in Redding/ Chico, California, from 2001 to 2003. In 2004 the lady moved to WLNE-ABC6 News. Till the end of 2009, Welker served at NBC as an anchor. Kristen Welker NBC news career started in 2010 when she became a correspondent at the NBC Universal News West Coast Headquarters in Burbank, California. Currently, she works at NBC News White House.

Kristen spoke about her career for The Every Girl and gave a piece of guidance for all women who wanted to become journalists: “My advice to young women pursuing a career in journalism is to be prepared and be confident… I wrote for both my high school and college newspapers, landing my first internship with “TODAY” when I was a junior in college… I bring that same level of preparation to the White House every day: I get in early, read as much as possible, and call multiple sources every day. It is also important to be confident in yourself. Journalism is a competitive industry, but if you work hard and stay determined, you can overcome any challenge.”

Kristen Welker parents are a Native American father, Harvey Welker, an engineer and an African-American mother, Julie Welker, an estate agent. Their story is, by the way, connected with her professional decision. Kristen Welker commented: “… when my mother ran for City Council, that was the moment when I knew I wanted to be a political reporter. Some reporters asked her about being married to my father – they have an interracial relationship – as if that was somehow a negative thing. I think my parents handled it with grace. I would get very upset about this line of questioning. It made me realise how important it is that political reporters are being fair. Tough, but fair.”

Kristen Welker was born in America, her dad is white, and her mom is a woman of a different shade. Therefore Kristen Welker ethnicity is mixed.

She studied at Germantown Friends School Germantown in an area of Philadelphia and graduated in 1994. In some time, she enrolled at Harvard College and graduated with a Bachelor of Arts in 1998. In 2008 she was nominated for Mid-Atlantic Emmy Award.

Kristen Welker marriage took place just a couple of years ago. Kristen Welker husband name is John Hughes, and he serves as a marketing director at Merck in Philadelphia.

The couple met due to common friends, and Kristen Welker remembered it as follows: “I’m 40 years old. I say that to give hope to other women who maybe haven’t found The One in their 20s. So two summers ago, my best friend from high school’s mother said, “I’d really like you to meet John Hughes.” He is their family friend’s son. I had just about given up on the idea of finding someone, but we had dinner in Philadelphia, and the rest is sort of history.”

The love story went on growing, and in June 2016, the man proposed to his favourite at Lincoln Memorial. Hughes described his choice of the place: “I wanted to ask her outside in a place you could walk by years later and tell your kids that this was the spot we got engaged.”

On Instagram, Welker wrote that she had been waiting for that day for nearly 40 years, and, indeed, the woman spread happiness. Kristen Welker wedding took place at the Hyatt at The Bellevue in the reporter’s hometown of Philadelphia on March 4, 2017.

Among the guests were spotted Kelly O’Donnell, Chuck Todd, Andrea Mitchell and her husband Alan Greenspan, David Cohen, Justin Pizzi, Aditi Roy, and Rev Kevin Johnson. They all watched the newlyweds dancing at their first song, “At Last” by Etta James. A bit later, in 2017, Kristen Welker shared a photo where John Hughes, Kristen Welker and their official marriage license received at Philadelphia City Hall were depicted.

Kristen Welker became prosperous in her professional field very quick but had to wait so long for happiness in her private life. Now she is enjoying the ride of her motherhood.

How Long Does It Take To Beat God Of War Ragnarok? (Realistically Speaking)

Katie Meyer Autopsy – What’s The Cause Of Her Death?

Nipsey Hussle Autopsy Photos – What Did The Pictures Reveal?

Reggie White Death – How Did He Die?