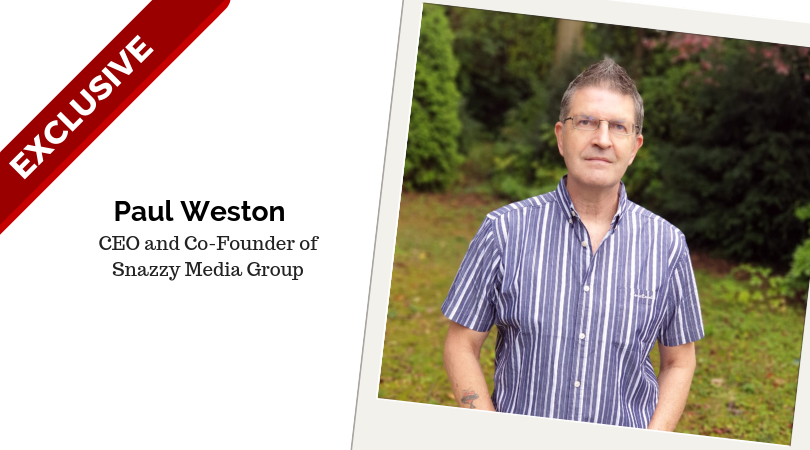 Paul Weston, a seasoned professional Businessman, Engineer and Entrepreneur with current business interests in the United Kingdom, Qatar and Dubai. He is Managing Director of a successful Engineering Consulting Firm and is also CEO and co-founder of Snazzy Media Group Inc with offices in New York and London.

Outside of his many Business Interests, Paul is married and is a dedicated family man who continues to believe that success arises from regularly maintaining a strong and equal work/life balance.

Tell us about your organization?

Snazzy Media Group Inc is a corporation registered out of Delaware in the US and was formed in September 2016 as a parent company of the celebrity fan based mobile app known as SNAZZY, which can be found on Play Store and App Store and listed as the “Snazzy App”.

Snazzy Media Group Inc presents a Social Networking and E-Commerce App that engages FAN-TO-FAN Gossips between Celebrities, Brands and Fans to interact among themselves and thereby enabling users/fans to buy Celebrity Products driven by Celebrity and Brand Engagement.

Snazzy has its office based in New York, with associated offices and representation in the UK, Europe, Middle East, Hong Kong and China. Snazzy has 2 founders and are the only 2 shareholders.

What makes Snazzy different than your competitors?

Snazzy differs from competitors in 2 main ways, namely it offers celebrity fans the opportunity to have specific news about their “Fave” celebs, delivered directly to their mobile phones as it happens, from thousands of news sources from around the world instead of having to trawl through dozens of websites….AND gives fans of the same Celeb, the opportunity to communicate directly with each other for the first time (unlike Twitter, Instagram and Facebook, which is based on ‘post & share” only). Snazzy App influences users/fans to buy E-Commerce Products through Snazzy Feeds, News and Gossip. It’s an Artificial Intelligence-based approach wherein which user is being fed with information based on user preferences.

Also Snazzy will bring the Top Brands worn or used by Celebs, directly to the fans on Snazzy’s new upcoming Ecommerce platform, due to be integrated into the app in early 2020.

What is your Vision about Snazzy? How does Snazzy tend to reach its desired Goal?

Snazzy will continue to be innovative and create a ‘Board of Directors’ from the worlds of Top Celebrity, Luxury Marketing and E-Commerce with a proven track record and will always be open to partner with like-minded companies or worldwide Brands to promote their products to Snazzy users. Our Vision is to make Snazzy the ‘Go-To’ place for celebrity fans worldwide.

What were your priorities when you started Snazzy?

The main priority in developing Snazzy, was to create a product unlike those which already existed and build a new worldwide platform which was designed and intended to be the “Go-To” place for celebrity fans worldwide, where anything and everything which was associated with any Celeb, could be found in ‘One’ place as a central reference point.

What is the Growth Potential of Snazzy? What are the Keys to its Growth?

The growth potential of Snazzy is immense both in its scope of content for the user within the App and also in its universal coverage of Celebrity related data produced ‘dynamically’ via our carefully developed Algorithms and built-in Artificial Intelligence. The keys to its growth lie in continuing to be creative and recruiting top rated individuals for new key senior management positions who can bring both exciting and fresh ideas to our company to complement our existing team and enable Snazzy to fulfill its medium to long term objectives.

What is the best and worst decision you’ve ever made in Snazzy?

Interesting question and one which makes me focus…. but on reflection, not a hard question to answer. Undoubtedly the best decision for me personally, was to quickly and very early on, realize the strength and potential expertise of my co-founder, to become a highly skilled ‘Director of Operations’ in this high-tech world and alongside myself, to ‘Lead’ the direction and development of Snazzy for the last 3 years from a simple app with a simple idea, to now have the power and positioning to become a Top name in the worlds of Celebrity news, Luxury Brand advertisement, Social media and Ecommerce Marketing.

A big “High-Five” to a brilliant thinker, my business partner, co-founder and Friend George John..!!

I guess the worst decision along the way was to employ sub contract developers and companies based on “price alone”, rather than on their ability or willingness to “see the overall vision” of Snazzy and join us on the journey to become future development partners, so as we grow, they grow.

Of course this was an inevitable pitfall, since the whole development of Snazzy from the beginning, has been self-funded by myself and my wife, without any form of investment from outside, not as Angel investment or any other venture capital whatsoever, meaning that whilst we were trying to get the best value for money, the downside of this approach is that other companies do not value their relationship with you as a current or future client and accordingly each part of the job is simply for a fee, nothing else, so deadlines are missed, the project takes longer than planned and in the long run the product takes longer to develop and come to market… that’s a big lesson learned,… only ever work with companies who share your vision, only then will they share your passion!

How has Snazzy impressed you the most?

Snazzy has impressed me mostly because of the unlimited potential of new ideas for celeb fan interaction, which can be interfaced into the original core idea. By this, I mean that Snazzy started with the sole objective of assisting celebrity fans to “identify” those fashion brands worn, or used by their “Fave” Celebrities at top events such as the Oscars, Emmys or Golden Globe awards etc. For example which item of jewellery, watch, necklace or Brand of Shoes or Handbag, was worn or carried on the Red-Carpet by which celeb at these celebrity based events. The idea was to report which was the most popular designer dress or designer suit worn by the top celebs so that their fans could also access details of each item of clothing or accessories and where to buy them.

As a result Snazzy has shown great versatility in being able to incorporate all celebrity based information within the app, giving it much greater scope and potential for growth beyond that originally planned.

Tell us about something you are proud of – about the greatest challenges you faced in Snazzy.

Without question, the greatest achievement and one of which I am most proud is the fact that after 3 years of consistent expenditure and constant design, upgrades and continued re-development of the product, that this has been achieved with no outside help or support. The big challenge was to keep finding further personal funding to continue the dream, rather than sell out early on, to hand over a large percentage of the shareholding to investors in order to proceed with the development and launch.

Investment “agents” or “Introducers” typically require ‘upfront fees’ simply to work on your case and assist to pull the necessary papers together to prepare a “pitch”, Plus between 5 to 8% of any capital raised as a “success fee” as part of any contract, before they will introduce your offering to any Investors. Whilst I understand the way the investment market works and of course, such agents have their place, for example, if entrepreneurs are unable to, or are unwilling to put their own money into their venture. This in my view is a very mercenary approach with most ‘agents’ rarely interested in your product, only interested in the fee, as naturally “its all about the money”.

I would always therefore caution new budding entrepreneurs to fund their project wherever possible and be very selective about who comes on board as an early investor in your new venture to absolutely ensure you get the right match.

I could not equally take money from an investor for the sake of having cash flow, if the investor had no real interest in Snazzy’s vision or worse, did not bring anything to the table in terms of skills or networking connections which could move us forward, hence this is precisely the reason why ‘Snazzy’ is still, and remains, 100% owned by the founders.

How has this Journey been personally for you as the CEO & President of Snazzy?

Seriously, this has been a major learning curve for me, not having had the background as a computer programmer or developer, this meant I had to “fast-forward” my knowledge and understanding of the process involved in creating a mobile app and all its particular stages of development from design architecture, back end coding, front end user interface design and naturally creating the algorithms necessary to make the whole thing function correctly.

One element of this program, which was crucial to me and the ongoing development of Snazzy, was appointing the correct person as ‘Development Manager’ to bring all the above things together in the proper order. Based on my earlier comments, I was NOT looking for someone only interested in the job for the salary only, but someone who saw it as his mission to succeed and believed in the vision of the founders and was focused on achieving its success at whatever cost. Such people are few and far between who are willing to put in the hours along with the founders and become an integral part of the management team at Snazzy as we continue to grow.

Sadly, most applicants were only looking for an immediate job, not a genuine career where their efforts, skills and hard work would be rewarded long term. Any successful entrepreneur will tell you, they never succeed by having limited goals and working fixed hours. Fortunately for Snazzy, we recruited the right person at the right time who shared the same work ethic as the founders and who has been instrumental in bringing Snazzy to where it is today.

How much potential market share can you achieve in the next 3 years based on the Growth of Snazzy and its Collaborations Worldwide?

I genuinely believe that this is a “Billion Dollar Venture”. Such optimism is underpinned by our growing collaborations during 2019, with other major players in the US in more recent times, which will now allow our Celebrity fans to use ONE portal, for booking and attending Celebrity Events, with Travel, Flights, Hotels and Entertainment ticketing in the US and globally.

Fans will be able to get the very latest news on their Fave celebs, follow the Brands worn or endorsed by those celebs, buy online on our upcoming Ecommerce site for top designer clothing and accessories and finally, book events, big game venues or concert tickets along with flights and hotels, making Snazzy, the ‘Go To’ place for celebrity fans worldwide.

How people should connect with you and Snazzy?

Download the Snazzy App on the Playstore or AppStore, or more specifically email to [email protected]

Interview with Jonathan VanAntwerpen – Founder of The Immanent Frame

An Interview with John Qreshi, Creator of The Quantum Spiritual Center