Roberto Casula, Eni Senior Executive on the Future of the Energy Industry 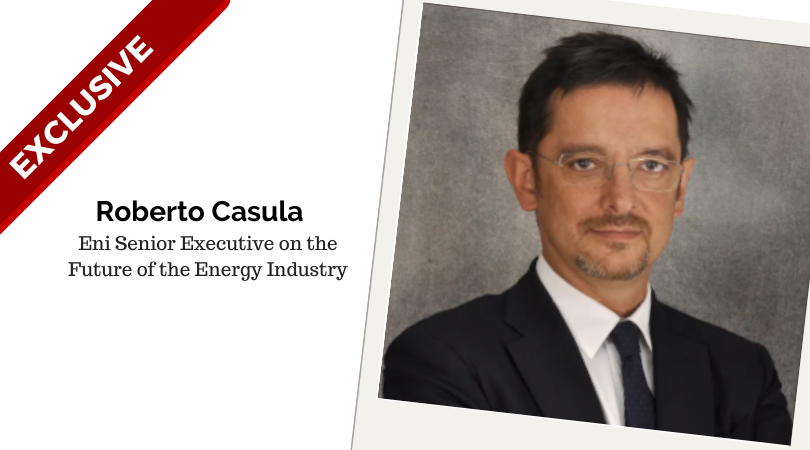 We recently had the opportunity to interview Roberto Casula, Eni Senior Executive and one of the more knowledgeable and articulate business leaders in the global energy arena to discuss the future of the oil and gas industry and what Eni is doing to promote a more sustainable and secure future for the world’s energy supply.

From 2004 to 2005, Roberto Casula held many managerial positions in Eni E&P, including the role of CEO of EniMed SpA before being appointed Managing Director of Eni in Libya in 2005.

In July 2007, Casula became the Senior Vice President of operational and business activities in sub-Saharan Africa. In December 2011 he was appointed as Executive Vice President of Eni E&P Division, extending his managerial responsibilities to the whole of Africa and the Middle East, including the program for the development of the Mamba and Coral discoveries in Mozambique.

Where do you see the opportunities for growth in the oil and gas industry in the next five years?

There are no doubts that the present energy ecosystem is changing, and industry players must adapt their business strategies to the future.

The oil and gas industry and related businesses continue to be cyclical, while during the past decades the influence of financial markets on the oil prices has been greater and greater — contributing to increased volatility.

To catch opportunities while reacting to this environment, it is very important to increase the efficiency in the day-by-day operations as to lower break evens and total costs of both development projects and operations, and secondly to build a balanced presence in anticyclical businesses.

However, the most important opportunities are related to the present environmental concerns on CO2 emissions and air pollution. This will push the demand for natural gas both as an energy source and petrochemical feedstock. Natural gas is key as a bridge fuel in the energy transition period toward a low carbon energy future.

Also, renewables sources will play a growing role in solar and wind power or biofuels more and more part of the industry business plans.

The common element here is the need for further advancement in R&D activities and technology.
If we do not heed the warnings, we do not adapt, and we just continue to hope the scenario changes without looking inside ourselves, we are running the risk to no longer be able to sustain growth in demand and impact on energy source diversification and security.

The discontinuities look likely to become part of the norm and we must be prepared to deal with them.

How is Eni positioned to support these opportunities?

In Eni we started to change the way we did things several years ago, particularly in exploration With a strong belief in what we were doing, our focus on conventional resources, ran contrary to an industry belief that unconventional resources were the way forward. We eschewed acquiring high-cost barrels in the belief that to grow you need strong M&A. We never wavered from the conviction that organic growth is not just possible, it is the sustainable way. This is supported by a series of discoveries in Congo, Angola, Mozambique, and Egypt.

By reshaping our operating model, we were able to achieve impressive time to markets while lowering the overall costs of development and operations.

Today our distinctive elements are:

What do you see as the key challenges facing the oil and gas industry over the next decade?

I do not doubt that fossil fuels will continue to play a very important role in global energy systems. This energy was instrumental to trigger the Industrial Revolution and the subsequent technological, social, economic and development progress we enjoy today.

However, fossil fuels are today under enhanced scrutiny because of their environmental impact. The world must therefore balance the role of energy in social and economic development with the need to decarbonize, which means to reduce our reliance on fossil fuels (in particular coal), and transition towards lower-carbon energy sources.

This is what is known as the dual challenge.

In other words: the world now finally understands that climate change is an issue to be tackled with force and urgency, but it also must balance this willingness with a growing demand for energy. We do see natural gas as the logical bridge between the present and future. A greatly increased use of natural gas would bring a significant reduction in CO2, especially replacing coal in power generation. It is also an ideal partner to renewables.

The oil and gas market has moved from supply to demand constrained. Oil prices have dropped from their peak, putting substantial pressure on margins and more emphasis on return on capital. This is leading to a higher focus on optimising operations through efficiency improvements and reduction of costs.

Funnily enough, this might be the incentive we have been needing in the industry to invoke some much needed change, to challenge ourselves to see how we can do things better and to find ways to produce safer, cheaper, and cleaner. Eventually, to ensure that global energy production can be both sustainable and diversified.

How is Eni positioned to overcome these challenges?

Second, Eni will pursue more opportunities along the value chain: growing LNG, giving greater value to equity gas and developing one of the largest refineries in the world in the Middle East.

Third, Eni is expanding its renewables and green businesses by designing and implementing innovative solutions based on a circular approach.

Technology, and especially, technological innovation, brings competitive advantage and is a must to tackle the dual challenge. This is a strategic priority for Eni and a responsible action towards our stakeholders, and the environment.

This is why Eni has announced in its business plan, a growth in low carbon sources, with an increasing share of gas and biofuels in our portfolio, an increase in zero carbon sources, such as solar, wind and hybrid systems and, last but not least, a circular approach, to maximize the use of waste as feedstock, and to transform and extend the life of industrial sites.

It is also paramount, that alongside technological development, we can count on a roster of extremely competent people. Insourcing, not outsourcing, is how to engender ownership and responsibility.

Getting it right with your people and processes enhances performance and controls costs. Synergies between people accelerate progress. Cross-discipline working and best-practice-sharing underpin operational excellence. The incredibly complex nature of our industry demands that we shape “collaborative work environments”.

These are the drivers of our new energy for long-term value creation, towards a low carbon future.