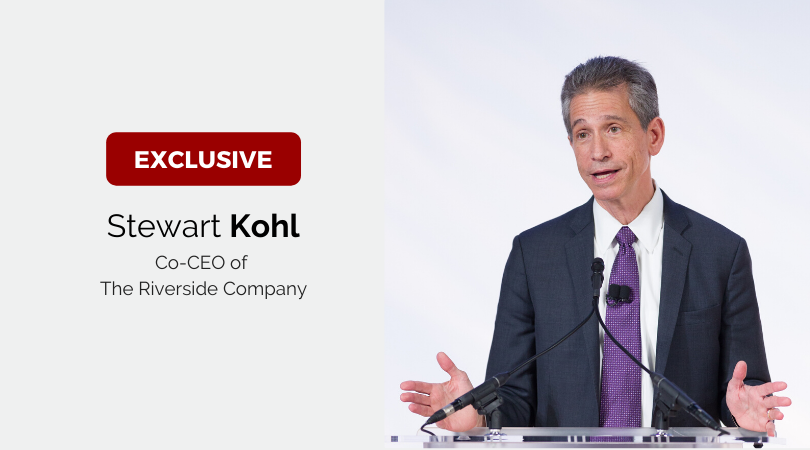 Stewart Kohl joined Riverside in 1993. Prior to that, he was a vice president of Citicorp Venture Capital, Ltd., the private equity arm of Citibank. Stewart Kohl serves as an Honorary Trustee of Oberlin College and Co-Chair of the Museum of Contemporary Art Cleveland.  He is also on the Board of Trustees of Cleveland Clinic and Co-Chairs its $2 billion Power of Every One Capital Centennial Campaign.

Below, we include selected, edited excerpts from recent interviews with Stewart Kohl from The Smart Business Network and explore the evolution of private equity and his unique approach to deal making that has helped make The Riverside Company one of the leading private equity firms in the United States.

Tell us about how you got started in private equity?

I got into private equity in 1988. When I graduated from Oberlin College, that powerhouse of finance in 1977. I did something very different for the first 10 years, but in 1987 I was reading about these things in the Wall Street Journal called leverage buyouts and I thought they sounded really interesting. It would be fun, it would be challenging, and something that I might like to do. So I was very fortunate to be hired by the folks at Citibank and did a 180 degree pivot into what we now call private equity.

Who were some of your earliest influences and mentors?

I have to give a big nod to some early mentors. Certainly, the folks at Citibank, Jim Petrus, Joe Carerras, John Kirby, Jim Mara, they were extraordinarily generous with their time and their wisdom to learn this business. Private equity, still today, really remains an apprentice business. It’s a business that you learn by doing and often, if you will, kneeling in front of somebody who knows what they’re doing.

Tell us about The Riverside Company and an example of a deal that you are extremely proud of?

At Riverside, we’ve done over 525 transactions in our 30 year history, and there are so many ones that I’m very proud of. Proud of our team, proud of the outcome, proud of how it benefited the company and its community. And then some of the early deals that I worked on when I was at Citicorp, I would particularly mention a transaction called Kemet Corporation that was a very successful private equity transaction. We made an acquisition from Union Carbide, grew the business, ultimately taking it public and making it a very successful company.

How do you decide how much to invest in a company?

The key to finding the right amount of capital to provide is to start with, what is the objective, then to lay out a clear strategy, and then to properly quantify what that’s going to require in terms of investment into the existing company as well as to do add on acquisitions. I think it’s important that businesses have enough capital that they not be capital constrained. On the other hand, human nature being what it is, anything in abundance, in too much, or free tends to be squandered. So I don’t think we want to starve businesses, but I think we also don’t want to make them too fat.

Interview with Jonathan VanAntwerpen – Founder of The Immanent Frame

An Interview with John Qreshi, Creator of The Quantum Spiritual Center

Decorate Your Home While Living In Dubai