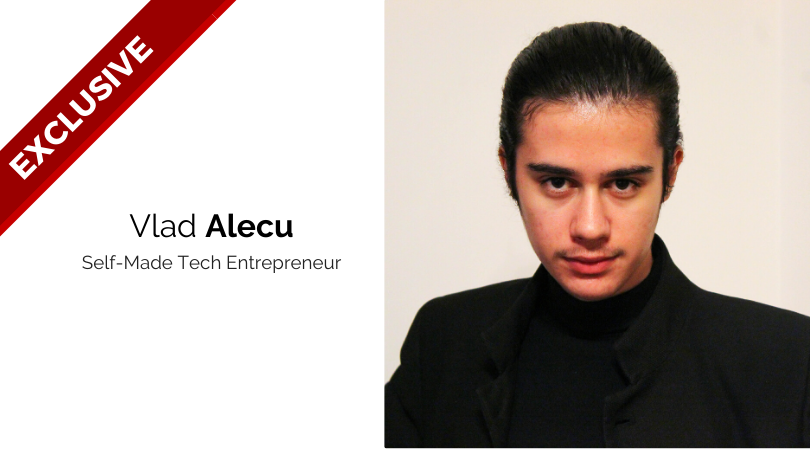 Vlad Alecu has been tinkering with electronics and technology since he was seven years old. He signed his first contract at age 13, for a media management company located in Los Angeles, US. This enabled him to have one of the first monetized youtube channels in Romania.

Since then, he has worked with several multi-million dollar companies from across the globe in the process of expanding their reach and presence online. He also founded a number of different ventures in the tech industry, including PublishFinder, WiredVibe, and PressHype.

Vlad is best known for serving as the Founder of PublishFinder, a start-up with partners & top clients like Amazon, Apple iBooks, Barnes&Noble, and artists such as Chrisann Brennan (Author of The Bite in the Apple: A Memoir of My Life with Steve Jobs).

Nowadays, he mostly focuses on his latest start-up, PressHype, a PR Management platform for the world’s hottest brands.

Thank you so much for joining us! Can you tell us a story about what brought you to start your business?

Thanks for having me. I’ve started with an idea that simply materialized in a business over time, hard work and patience have been an important variable here. I’ve actually never thought of starting a company or anything similar for that matter. I just wanted to create something significant for me and others.

A great quote comes to my mind, from Steve Jobs: “I’m just a guy who probably should have been a semi-talented poet on the Left Bank. I sort of got sidetracked here.” – I believe this applies to me as well. It says a lot about a person who you’ll probably call a businessman. Forget about that.

The point is, never start a company for the sake of starting a company. Find a solution to a meaningful problem and go up from there.

Well, I was 15 or 16 at the time when I started PublishFinder. I had nothing to lose, almost no assets, and zero dollars, none.

So, I decided to write and self-publish a book based on my past experiences in digital marketing.

I really wanted to create something even more useful but didn’t have the budget nor technical capabilities to create a tech company, let’s say. So that was that.

I first launched a digital version of my book on Amazon.com and began working on a paperback right after that. I did everything myself, including cover, formatting and anything necessary to deliver a great product.  After this initial success, I began collaborating with other authors and repeating the process that brought me success, expanded the retail network to 50+ stores worldwide in less than a year.

One could say, my first business was just an essential part of a rocket, like a booster. It really changed everything, but I’m not done yet.

PublishFinder just switched to yet another business model, hopefully the transition will be made as fast as possible.

WiredVibe, it’s probably one of the most complex projects I’ve ever worked on, a lot of engineering problems need to be solved, including developing a great Artificial Intelligence framework to generate specific sounds for the platform.

And finally, PressHype, my latest venture, which will launch within 3 months. I’m so excited for it, you can’t believe it. I think it’s going to revolutionize the way in which people approach PR campaigns.

How many people work for you currently?

It often depends. Our main business model across every single venture is SaaS, so it’s almost 100%  automatic by definition. We usually hire contractors to do some of the work, over an extended period of time.

What advice would you have for other new entrepreneurs?

You know what they say, just do it. Minimize your regrets. Focus like a monk.

We don’t predict this kind of stuff. There are a lot of things changing right now, I tend to focus on those. On the other hand, for example, PublishFinder is without a doubt the biggest digital publishing house in Romania. The problem? We focus on international markets, not local.

Best purchase? I’d say my Tesla Inc. shares if we count the financial returns. If not, the biography of Steve Jobs and some of the books from authors like Ram Dass, Eckhart Tolle.

My worst purchase is probably a random piece of clothing I never used.

Who supported you the most in your life?

In a traditional sense, my parents and relatives.

What are your future plans?

It’s a really complex question… for the most part, building and delivering great products to customers, making a difference, designing new technology.

In the end, I think more people need to make the transition from software to physical businesses, like a car manufacturer or something between those lines.

For now, my budget is split between 3 projects.